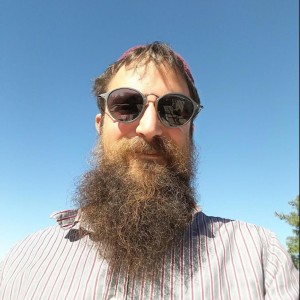 Deputy FM tells world ‘Israel is ours’ – via artHotovely explains new painting in her office showing sites the Torah records were purchased by the Jews, in ‘discourse change’ on rights.Nitsan Keidar, כ”ו בטבת תשע”ו, 1/7/2016

In recent days Deputy Foreign Minister Tzipi Hotovely (Likud) has redecorated her office, hanging a famous painting of the artist Baruch Nachshon in a prominent place, and in doing so making a strong statement of Jewish land rights to Israel.

The painting features depictions of the Cave of Machpelah in Hevron where the Jewish patriarchs and matriarchs other than Rachel are buried, as well as Joseph’s Tomb in Shechem (Nablus) in Samaria, and the Holy Temple in Jerusalem.

It bears the following ancient rabbinical exegesis from Genesis Rabba 79:7 that notes how the purchase of the three sites is recorded in the Torah: “three places where the non-Jews cannot say to the Jewish people that they stole them: the Cave of Machpelah, the Holy Temple and Joseph’s burial place.”

Hotovely told Arutz Sheva about the new painting in her office, saying it sends a clear message to visiting dignitaries.

“The picture shows the holy sites to the Jewish nation and the attachment of the people of Israel to these places,” explained Hotovely.

“The talk about rights and historical attachment is part of the change in discourse that I am trying to lead.”

Shneor Nachshon, the artist’s son, contacted Hotovely and proposed that she hang the painting in her office.

The offer came after she was appointed as deputy foreign minister, and in her opening speech raised an uproar by quoting the famous Biblical commentator Rashi’s first exegesis on the book of Genesis, which anchors the Jewish people’s rights to the land of Israel in the face of the opposition of the nations by explaining that God created the whole world and God promised the land to the Jews.

Everyone adores this grandmother – but the Israeli Government doesn’t know what to do with her.

who inspires the world with his work, from the city of Hebron. Baruch also gives us all some much-needed wisdom. Orly also talks about today’s